The new propulsion system driving the Charger Daytona SRT Concept produces an electrifying BEV exhaust sound that is much better than any other loud car on the road today. This vehicle muscles aside boring BEV paradigms with performance that exceeds even our famed SRT Hellcat engine!

The new concept's modern exterior appearance incorporates subtle Dodge influences while also exceeding aerodynamic standards. Interior design features a link to provide a driver-centric, immersive experience that morphs inside and out at the touch of a button with sounds, displays, and lighting features that change both in and out.

R-Wing: Industry-first BEV exhaust that may reach 126 decibels, making it as loud as a Hellcat-powered Dodge eRupt; Fratzonic Chambered Exhaust: A unique aerodynamic pass-through design feature that connects the concept with its brand namesake;

"The Dodge Charger Daytona SRT Concept exists because performance made us do it," stated Tim Kuniskis, Dodge brand chief executive officer - Stellantis. "Dodge is about muscle, attitude, and performance, and the brand continues to carry that chip on its shoulder into the BEV market through a concept packed with patents, inventions, and performance features that represent the electric muscle of tomorrow. The Charger Daytona SRT Concept can go beyond just running the car show circuit; it can also run a flying quarter-mile." When it comes to product cycles, it outstrips Darwin. The all-new 2023 Dodge Hornet was revealed one day ago, and it will redefine American muscle in the process. Today, we unveiled a sneak peek at our eMuscle future with the Dodge Charger Daytona SRT Concept. When we said that this was going to be an electric summer for Dodge, we meant it.”

A new propulsion system powered by high-horsepower household names such as HEMI®, Hellcat, and Redeye ties it all together. The Brotherhood of Strength has a new peak in Banshee. 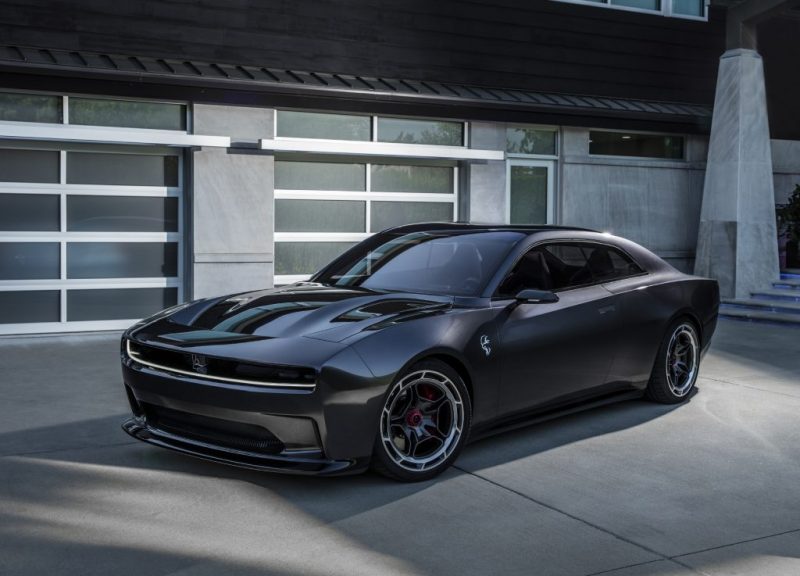 The 800V Banshee propulsion system is what makes the Dodge Charger Daytona SRT Concept car so fast, performing better than a Hellcat in all key measures. The included all-wheel-drive standard improves this vehicle's capability to perform well in any weather conditions.

The Dodge brand's eRupt multi-speed transmission with electro-mechanical shifting offers distinct shift points, throwing shoulders into seatbacks in the style of a real Dodge. A PowerShot push-to-pass function is also available on the Charger Daytona SRT Concept. When activated by a push of a button on the steering wheel, PowerShot delivers an adrenaline surge of extra horsepower for a short burst of speed.

Design is the top priority for Dodge Charger Daytona SRT Concept. The unrivaled design not only offers a BEV that looks different than any other car on the market but also refers to aspects of the brand's muscle car history.

The Charger Daytona SRT Concept's design R-Wing, which is pending a patent, changes the typical Dodge front end while still keeping its blunt profile that characterizes Dodge. By doing so, we have created a more aerodynamic vehicle.

A front R-Wing, a tribute to the original Charger Daytona concept and a key figure behind its creation, allows air to flow through the vehicle's front opening, increasing downforce. The sporty performance hood integrates with this functional design while maintaining the brand's strong exterior motifs. Carbon fiber intakes tucked into both sides of the front and rear lower fascias create an aerodynamic air curtain that aids in aerodynamic performance.

The Charger Daytona SRT Concept is designed to exude confidence and power on the road. The front grille features cross-car illuminated lighting centered by a white Fratzog badge, a symbol that was hinted at last year by Dodge. Until now, the three-pointed Fratzog badge, which previously appeared on Dodge muscle cars from 1962 through 1976, had no significance or context — until now. The return of the Fratzog logo symbolizes Dodge's electric future, recalling the brand's unshakable dedication to its performance heritage, but with new technology that is capable of going well beyond today's vehicles.

The intricate pattern on the grille is inspired by the 1968 Dodge Charger, while the exterior color Greys of Thunder playfully nods to the brand's heritage. The concept car embodies performance in its simplest form, with clean lines and a deep glossy finish. The wheel wells are not only functional, but they also give the vehicle a more planted appearance and emphasize the top section, keeping the visual weight up high. The body styling is enhanced with subtle, muscular wheel fender shaping.

The car is sleek and unassuming, with the only essentials for forwarding light. The headlights are practically nonexistent because of the R-Wing and work seamlessly with the aerodynamic surface to provide minimal components for forwarding lighting. Flush door handles, a 3D illuminated Fratzog badge, and unique exterior lighting elements make the Charger Daytona SRT Concept's silhouette easily recognizable even in the dark. The Banshee fender badges are made of brushed aluminum and announce the new propulsion system that drives the concept car.
Wheels that are 21 inches and have faces that are cut like diamonds keep the car aerodynamic with a turbine-like design. A Fratzog logo that is red is in the center of the wheel locks. Brakes that are grey and have six pistons help the driver stop quickly.

The new hatchback design is both functional and fast, making it the perfect car for those who need a daily driver that can also handle the track. With rear seats that fold flat, this concept car offers unexpected levels of utility and storage capacity.

The interior of the Dodge Charger Daytona SRT Concept is designed with the driver in mind. It is modern and lightweight, yet still provides all of the essentials that are needed while driving.

The 12.3-inch center display, the biggest available in a Dodge vehicle, curves nearly ten degrees towards the driver, and the 16-inch instrument cluster is curved, creating a cocooned, driver-focused atmosphere. An 8-by-3-inch Head-up Display (HUD) delivers additional vehicle information to the driver. The "waterline" that runs across the Ultraviolet color with blue and silver accent stitching slim, instrument panel (IP), and mid-bolster in have a cross car extension called "waterline." The top IP is a step higher, with an elevation change that results in a sculptural surface floating above the cluster. The Ultraviolet hue also touches numerous interior surfaces, such as the console, doors, and seats, creating a halo that works in tandem with the Attitude Adjustment LightingTM to enhance shadows and highlights.

A parametric texture unifies the interior and draws inspiration from the 1968 Charger grille detail on the inside, continuing to connect the inside with the outside. The pattern, which extends from the IP to door appliques, beneath the console, and to the rear armrests and rear console, gives fluidity and sculpture. Its interior texture is dynamic and three-dimensional, reflecting light and reacting to the surrounding environment, with lines that emanate as they migrate backward. The ambient attitude adjustment lightingTM illuminates the texture from below, experimenting with depth and dimensions.

The carbon fiber floor has circuit-like graphics that flow under the seats, run to the center console and IP, and return to the driver, creating a circuit board that connects one to another. The lightning bolt shape on the accelerator pedal alludes to the car's electrified powertrain, as does the twin Blue Plasma and Silver stitching that surrounds the whole interior. The illuminated white Daytona lettering on carbon fiber door sills, with lighted Daytona lettering, also positioned at the top right of the mid-bezel, is a distinctive feature.

The doors and center console have a sculptural design theme, which only includes the needed elements. A pass-through area under the console creates a lighter feel. The center console has some clever touches, such as a jet-fighter-inspired cap that flips up when you engage the start button. The unique pistol-grip shifter is inspired by the past but with modern execution. It functions as a mechanical precision piece that delivers an effortless shift experience when you squeeze the pistol grip’s trigger.

The steering wheel has been redesigned to give it a thinner feel. It is flat on the top and bottom, with the center spoke not connected to the rim, giving it a floating feel.

The Dodge Charger Daytona SRT Concept's seats are light, sporty, and slim in design, with a perforated pattern of the Fratzog logo insert. The distinctive design fades as it travels down the seatbacks before returning to its original form as it flows toward the center of the seatbacks. The upper seatbacks have openings and cushioning for an airy race-inspired feel while still keeping you comfortable.

With one touch of a button on the steering wheel, drivers can select from Auto, Sport, Track and Drag modes to change interior lighting features, HUD content, performance sound, and more.

The Dodge name has been associated with automobiles since 1912 when brothers John and Horace Dodge founded the corporation. Their legacy lives on today as Dodge enters high gear with muscle cars and SUVs that outperform their rivals in each of the categories where they compete.

Dodge is a performance brand that has expanded its portfolio to include SRT models of all models. For the 2022 model year, Dodge offers the drag-strip dominating 807-horsepower Dodge Challenger SRT Super Stock, the 797-horsepower Dodge Charger SRT Redeye, the world's most powerful and fastest mass-produced sedan, and the Dodge Durango SRT 392, America's fastest, most powerful and most capable three-row SUV. These three muscle cars bring Dodge to total power among American brands, with more horsepower than any other US firm across its entire range.

We can only hope to see the new Charger at Unique Chrysler in Burlington as soon as possible.

In 2020 and 2021, Dodge was named the “#1 Brand in Initial Quality” by J.D. Power, making it the first domestic brand to ever receive such recognition two years in a row.